The choice of lock (and, therefore, the cylinder) for the entrance door is often the most carefully considered, because it has the task of defending the main access to the house. The lock must be as strong as possible to resist any type of attack and the European profile cylinder is currently the most complete and cutting-edge system for the role it must cover: in combination with the lock, to prevent unwanted access.
However, although one cylinder might appear to be the same as another, details are hidden inside which denote a good quality cylinder, which is able to offer security and reliability over time.
We are about to reveal them to you!

The most commonly used material for the construction of the bodies and the plugs in the European profile cylinders is almost always brass, often with nickel-plated external finishing, which guarantees duration over time.  The composition of the pins and counter-pins, and more generally the internal components, can vary, and this contributes to defining their quality.
A good quality cylinder is made of stronger materials, such as stainless steel and / or hardened steels.

Brute force attacks are commonly used methods, especially because they do not require great technical expertise, special skills, or specialist tools. The first characteristic necessary for a high security cylinder is therefore to be able to withstand as much as possible these types of attacks.
A cylinder can be attacked by force mainly in two ways: by drilling the body or the plug, or by damaging the cylinder body and plug with tools such as drills, pliers, hammer and chisel, trying to break it, extract it or knock it inside, so that the lock can then be triggered.To withstand attempts to open using brute force, a cylinder must therefore have both anti-drill reinforcements (on the body and on the plug)and pull-resistant reinforcements, especially in the central area, which is structurally more fragile. 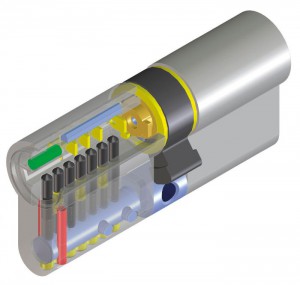 In the Viro Palladium high security cylinder the pins, counter-pins and springs (shown in black in the drawing) are made of stainless steel.

An additional important protection can be provided by a security escutcheon.

Also, to prevent the cylinder from being forcibly knocked inside, it is worthwhile providing an anti-withdrawal cam. 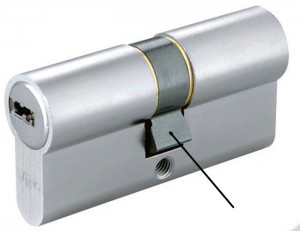 The arrow indicates a square shaped DIN cam which, with the key extracted, protrudes from the body of the cylinder (generally with an angle of 30°) offering resistance to any attempt to force the cylinder out of its seat.

The lock and cylinder are two different mechanisms which complement each other and both contribute to the overall security of the door. It is therefore important to choose them so that the composition is balanced. It makes no sense to install a high security cylinder on a weak lock, or a poor quality cylinder on a high-end lock. The lock must be able to withstand attacks with brute force, whilst the cylinder must be able to also cope with the various techniques such as lock picking or key bumping.

Read here how to protect against this type of attack

The illegal copying of keys

To conclude, we can say that a high-security European cylinder must resist attempts at forcing and manipulation, but this is useless if it is possible to easily obtain an illegal copy of the key.
For this reason there are keys, such as the Viro Palladium series .PV and .PB, which fall into the category of controlled duplication. In fact, in order to obtain a copy, it is necessary to got to an authorised centre, with an original key and the coded ownership card,provided in a sealed envelope inside the cylinder package. 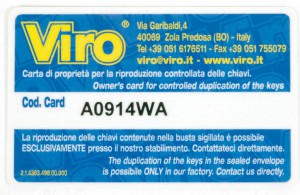