One often chooses to install an internal knob on the entrance door so as to be able to also open and close the lock without having to use the key. In effect, the internal knob is convenient, but it also brings an important security issue which should not be underestimated.

The risks of internal knob

A burglar who has entered the house through another access, such as a window or a balcony, can, thanks to the knob, easily open the entrance door from the inside and leave carrying bulky objects with no problem at all, thereby obtaining a dual benefit. On the one hand, the burglar leaves faster and without difficulty, and on the other hand it is less obvious, rather that if forced to exit from where they entered. The internal knob on the lock of the entrance door provides a burglar with a convenient way out (photo by Flickr/C.P.Storm).

On the contrary, if there is no knob, the burglar would be forced to break through, and if he did not do so to enter it will very unlikely he would do so to exit. The burglar would therefore probably leave by the same way he entered. If it is a window or a balcony it would be more difficult to remove large items, such as paintings, televisions, etc. It would also increase the chances of the burglar being noticed by someone and identified as a thief. Let us remember that, in the eyes of a neighbour or passer-by, a person walking out of a door, even if they are carrying bulky objects at unusual times of the day, can be a friend of the owner who is helping during removals, whilst someone doing the same thing coming out of a window or a balcony certainly gives the impression of a thief! Without a knob, a burglar is forced to exit through an opening other than the entrance door, with a greater risk of being spotted (photo by Flickr/Marshall24).

For this reason, the use of cylinders with knobs is only recommended on internal doors and not on main entrance doors.

If you really do not want to lose the convenience of an internal knob you can adopt one of the following solutions. 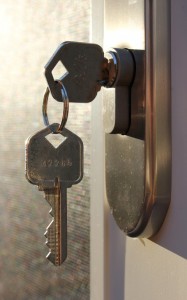 Instead of the knob you can use a key which is removed when you leave. In this case, if you want to keep the possibility of opening the lock even from the outside you must use a frictioned cylinder

As is often the case when it comes to security, a greater convenience may mean a greater potential risk. In the case of internal knob, however, following the tips mentioned above you can achieve both.

7 thoughts on “The internal knob on the lock of the entrance door is convenient but dangerous!”