Whenever possible, it is preferable to build in the safe, considering that the attacks which thieves can carry out on safes are facilitated or, on the other hand, effectively contrasted, by the quality of the built-in installation. Let’s look at 5 simple rules which will ensure that our safe is built-in in a way which will maximise the security.

The first rule is that the fewer people who know that there is a safe in the house, where it is, and how it is made, the better it is. For this reason, in the case of a new building, it is always good practice to avoid having the safe built in whilst the construction is still in progress, when there are dozens of people around. The installation should therefore be carried out at a later time and always by a trusted person.

Breaking into, and even unhinging, a safe is much harder the higher the safe is installed, as the handling of burglary tools becomes more complex and laborious. A great position is at eye level, as this is handy for individuals using it, but inconvenient for potential thieves. Having to lift a sledge hammer upwards to attack a safe is much more tiring and less effective that striking the door from above. A clear example of how it is relatively easy to break into a safe which is built-in low down can be seen in this video:

Where to put the safe

Space is needed in order to effectively manoeuvre a sledge hammer or crowbar, and take full advantage of the leverage effect.If you can position the safe in the corner and/or in a narrow corridor, it makes life much more difficult for those who want to attack it. For example, if the side of the door with the hinges is near a corner of a room, there is not the physical space needed to lever with a crowbar; similarly, if there is less than 2 metres between the safe and the wall in front of it, it is not possible to apply considerable force with the sledge hammer as there is not sufficient space (5 kg sledge hammers usually have handles of 70-90 cm).

Lastly, it is necessary to avoid obvious places such as the classic position behind a painting in the living room or bedroom, or the classic solution of the “cabinet safe”. Restricted spaces, such as beneath stairs or in a cellar, etc., are much better.

A wall safe is obviously much harder to remove from the wall the better it is positioned. The mix for the concrete must be prepared using excellent materials (e.g. 425 cement mixed with sand at a rate of about 400 kg/m3). If the wall in which is safe is to be installed is made of reinforced concrete, an excellent solution is to anchor the fins on the rear of the case to the reinforcement inside the wall. But even in the case of an ordinary brick wall it is essential that the fins on the rear of the case are fitted with steel brackets or bars, which are longer than the size of the of the safe itself, in order to increase the anchoring length inside the wall, thus ensuring that considerable time, work and effort is required by thieves wishing to remove it. For an even better anchorage, the fins on the rear should be bent to an “L” shape, and not be straight.

In the case of a free standing safe, on the other hand, it is important that the anchor dowels are very large and fitted with pull-resistant tabs, and that they provide maximum resistance according to the type of wall. A chemical anchor dowel is recommended. There must be a large number of dowels in order to distribute any attempted break-in forces over multiple fixing points: good safes normally have 4 or 8 anchor holes fitted on the rear and the base: less expensive safes only have a couple on the rear. 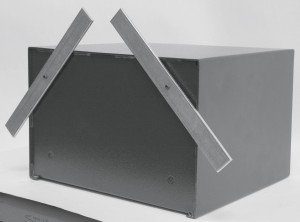 Buying a good quality safe to protect your valuables is not enough if the right precautions are not used during installation. Rely on a qualified tradesperson, who is not only professional in building in the safe, but also in keeping the secret!

You can see the catalogue of Viro safes here

2 thoughts on “Useful tips for correctly installing a safe”